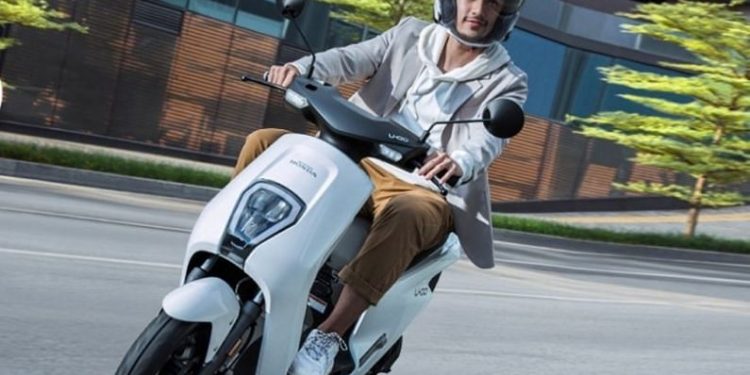 Honda has launched the U-GO electric scooter through its Chinese arm Wuyang Honda. A report by Electrek states that the lightweight e-scooter designed for city riding has two variants that come with different speeds and power. The standard model of the Honda U GO will come with a 1.2 kW continuous rated hub motor that will produce a peak output of 1.8 kW.

The top speed of this version is 53 kmph. Talking about the low speed model, it sports an 800 W continuous hub motor with 1.2 kW of peak power. Its top speed is 43 kmph. Both these models are powered by a 48V and 30Ah removable lithium-ion battery with a capacity of 1.44 kWh. The powertrain delivers a range of 65 km which can be extended up to 130 km with the addition of a second battery.

Honda U-GO has features like LCD screen which gives information like speed, range, charge and riding mode of the scooter to the users. The scooter sports an LED headlight with triple beam on the front apron and also includes an LED DRL strip that surrounds the main cluster. The e-scooter gets 12-inch front and 10-inch rear alloy wheels. It gets 26-litre under-seat storage.

Honda has announced this electric scooter for the Chinese market and its price starts at RMB 7,499 ($1,150) which roughly translates to Rs.85,000. The report also suggests that if not immediately, but Honda will introduce its electric scooters in other markets. It added that many low-cost electric scooters have followed the plan to launch first in China and then in other western markets.

The Honda U-GO may also be launched in India later as most of the new electric scooters and motorcycles are launched in the country. However, no official information has come from Honda about this yet.

Electric car will be available for less than Rs 5 lakh and the range will also be tremendous, know when it can be launched

Anand Mahindra to gift XUV700 to golden boy Neeraj Chopra, know when this SUV will be launched and what will be special in it