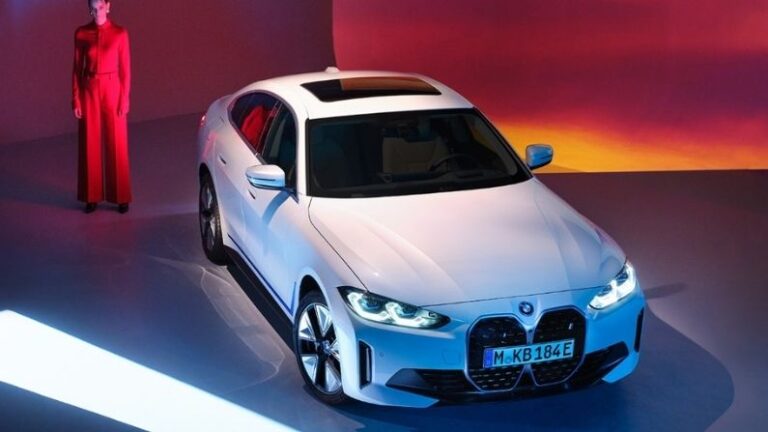 BMW has finally unveiled the all-electric i4 electric sport sedan today. The BMW i4 Gran Coupe was unrapped in BMW’s group annual conference. However, some technical information of the vehicle has been kept safe for the time being. The BMW i4 is a completely 4 door gran coupe that could be launched in the market this year. The production version of the vehicle was shown during the conference.

BMW has confirmed that the i4 will be launched in three power versions including eDrive35, eDrive40 range-topping M50 xDrive. The BMW i4 comes with a range of 590 km. That is, once charged, this car will cover the distance of so many km. The electric sedan engine will give you 530hp power. This vehicle catches a speed of 0 to 100 km in just 4 seconds.

Let us know that the 2022 BMW i4 Electric Sport sedan will not be much different from the concept version shown at CES 2020. In this too, you will get a reworked grill. After seeing the new BMW i4 shared on social media, it seems that it could be the electric version of the upcoming BMW 4 Series Gran Coupe.

The BMW i4 will take on the Tesla Model 3 in foreign countries. Although there is no information about its price at the moment, but the report is being said that the company will keep it near the prize tag of M3 / M4. The BMW i4 will be the first electric sports car made by a German carmaker to use iDrive8 technology. You can be given a 14.9-inch touchscreen display, a 12.3-inch digital instrument cluster and a new i4 cabin in the vehicle.

Bad news for Toyota car customers, 9000 vehicles are coming in this big problem, the company took this step

Skoda Kushaq’s world debut is going to happen today, these 5 best features can be given in the vehicle

-Vinay Kumar A total of ten franchises have geared up for the upcoming season, including…