Agriculture Success Story: The story of a farmer who cultivated guava that takes a long line to buy 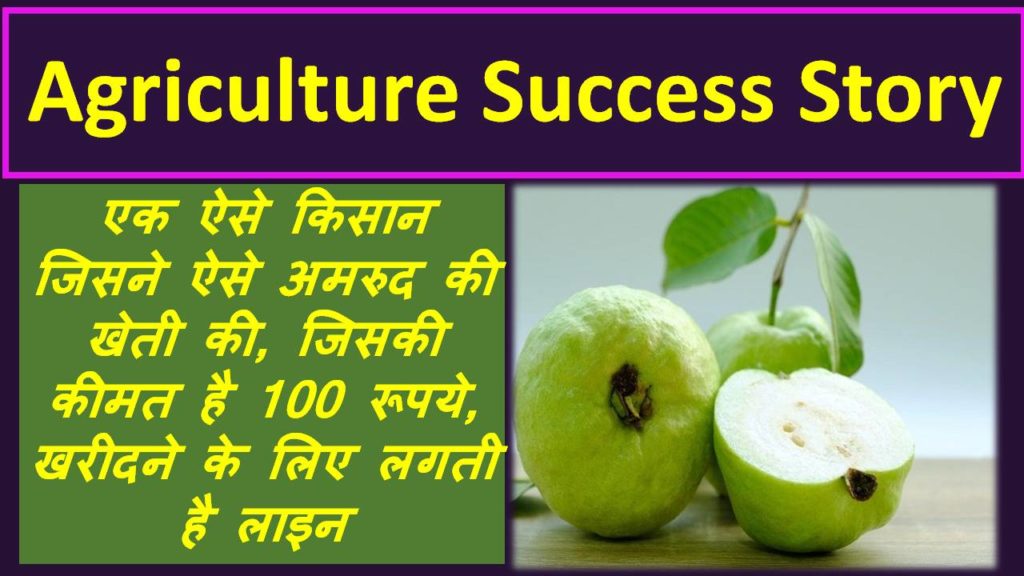 Gradually, the number of farmers doing traditional farming in the country is increasing. Some fruits and vegetables are such that even after keeping them in mandis for a long time, farmers are not able to get their good prices. But in spite of all this, the farmers of the country show some work with their hard work and dedication that not only their name but also the name of the country is illuminated. One such farmer who has become very famous by cultivating guava, who sells guava in his field for Rs 100 for guava. Let’s know the farmer whose name is Sunil Kandela, the story of achieving success by cultivating his guava.

Sunil Kandela is such a progressive farmer who has achieved a successful place today by changing his farming practices. A farmer who grows various types of guava, which you cannot call guava and you will not find it easily in the market. You will be surprised to know that Sunil Kandela grows such guava which is very heavy in weight. Only one guava can be eaten by two or three people. When talked to Sunil Kandela, he talked about his farming in detail and told that 2 years ago he thought of planting a guava garden in his 3-acre farm. Out of that three acres of land, he cultivated guava in Thailand’s finest variety.

Learn Cultivation of Mushroom Worm Herbs The success story of the farmer who did it.

Sunil Kandela narrating his success story said that he worked hard to grow the best guava crop in the garden every year and then he could grow guava in his garden in large numbers. Sunil told that he neither took any marketing assistance to sell his guava nor did he see the way to the market to sell his guavas. It is very surprising that people themselves go to their fields to buy their grown guavas. Even people not only from their village but also from the nearby village districts and other states also go to buy guava in their fields.

Explaining his farming in detail, Sunil said that he loves his guava crop so he has covered the fruits of the plants in his field with triple protection from them. They have grown the fruits grown inside their farming in triple production form so that they can be completely protected from heat, cold, dust and diseases. Due to his technique, the size of his guava has increased to a great extent in today’s time, and everyone is surprised to see it. He shared his experience and said that he has not used any spray in his plants nor does he use chemical fertilizer nor any other chemical.

In his field, only the manure prepared by natural means is used by strangling the grasses and leaves of plants. The most surprising thing is that along with his guava cultivation, he has also grown three cows and using cow dung and urine of those cows, he prepares manure and with the same manure to nourish his farming Let’s work.

You will be surprised to hear the weight of guava grown with this technique of Sunil. The weight of each guava grown in Sunil’s fields varies from at least 800 grams to 1 kg.

Sunil is completely dependent on natural things, so his cultivation is also very good, due to which his guava is different and extremely tasty. The biggest thing is that Sunil does not have to go anywhere to sell his guava because people themselves reach his fields to buy those guavas.

To know the success story of Haldiram Click here.

Sunil prepares a variety of organic manure by mixing natural fertilizer and de compositor in urine in his guava orchards. The cost of this compost is very low and due to the use of this compost, no kind of pesticides are used in farming. Due to this fertilizer, the team of Agriculture Department from Panipat also went to their fields to investigate how much beneficial Sunil’s guava and his garden is. When he saw and tasted the quality of guavas, he was really surprised. The Agriculture Department team said that they have never seen such guava before and have never eaten them.

Seeing so much loyalty towards Sunil’s farming, people should take inspiration from him so that he can make efforts to improve his farming techniques naturally. If we use more and more of the things made from nature, then our country can really go far ahead in terms of agriculture.

Amazon Prime Day Sale: Amazon is bringing on July 26 and 27, there will be bumper discounts on sale, smartphones and electronic products

Facebook is bringing hotline in the competition of iPhone App Clubhouse, besides audio, it will also be able to do online discussions through text